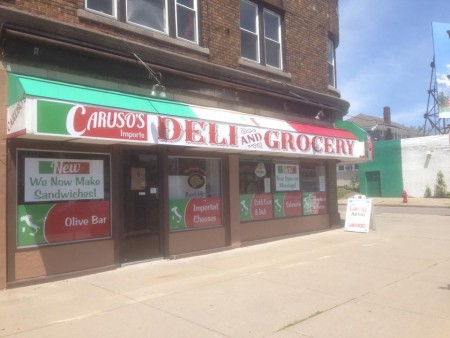 In 1989, Vince Caruso decided to open his own Italian import store on the corner of Hertel and Lovering Avenues. His goal was to offer authentic Italian food products, including Italian pastas and olive oils, a variety of imported cheeses and deli meats, fresh fruits and vegetables, and more.

In the summer of 2014, this “neighborhood deli and grocery” store in the heart of North Buffalo’s Little Italy considered closing its doors. But local business partners Erik Hoertz and Melissa D’Arcangelo decided to step in.

Erik and Melissa have always dreamed of owning their own business and when the opportunity to purchase Caruso’s Italian Imports and Deli came up, they jumped at the chance. Although he didn’t make any major changes to the store as a whole, Erik understood that Caruso’s had a long and storied tradition in the Hertel neighborhood, and they wanted to carry on that tradition.

In order to attract some new customers, Erik did add a few new products to shelves and deli—including Boar’s Head deli meats, a mouth-watering assortment of Italian cookies, Shelburne Farms cheese from Vermont, and other products made locally in Buffalo. He also added some new and exciting offerings such as cold deli sandwiches made to order, freshly made cheese plates, and hot cups of espresso.

Aside from some “light” remodeling, which involved putting in a new floor, adding fresh paint and fixing areas of the ceiling, Erik is confident that the store looks and feels like the same old Caruso’s. And many customers seem to agree.

Erik also plans to expand Caruso’s product lines even more in the coming months. He’s interested in what customers want, and he’s willing to listen to all requests. Feel free to contact Caruso’s for product requests, suggestions and general comments.

Get directions from Go

Unable to find any directions.